Back to Blog Posts
Prev Next

Natural Resources minister Sohi says work on  the TransMountain pipeline is proceeding. When completed, 590000 barrels of Alberta oil per day, will be deliverd to the Burnaby terminal for export. The construction of the TransMountain pipeline is to be completed by December 2020; and is projected to be completed at a cost of $8.4 Billion dollars. At present workforce housing is being built; Stockpile sites are being prepared. And work continues at the Marine terminal in Burnaby, BC, says Minister Sohi. Preparatory work on the pipeline route is schedule to start August 25 in Alberta. And Kinder Morgan Canada LTD. is preparing to lay pipe in the ground in Alberta, by January 2019. [Source Geoffrey Morgan FP]This means the Alberta economy is set to receive a much needed boost for the next two years. Expect house prices to rise with the combination of a robust Canadian economy and accelerated Alberta economy, Interest rates are still relatively low; but also expect a corresponding increase in mortgage Interest rates, with rising house prices. It is still a buyers,

market; but expect a change to a sellers market as soon as the millions of TransMountain pipeline dollars hit the alberta economy; and  gives the Alberta economy a much needed boost. Buy Now. House prices are heading higher. 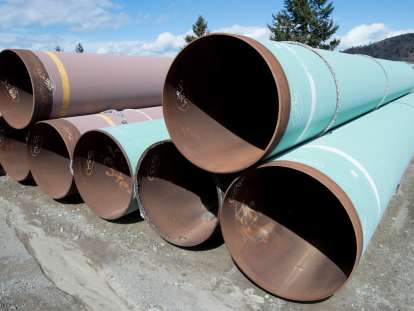